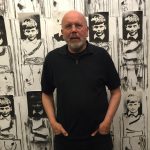 He has a number of ways of developing ideas. Words and concepts are recorded in sketchbooks with lined and plain pages. His vocabulary of mark making develops in concertina sketchbooks and the start of a new group of work will usually begin with a drawing that covers a wall in his studio.

In the last two years his work has been more and more centred around a short stretch of the Thames foreshore at Convoys Wharf in Deptford. From the foreshore has emerged a strong collection of drawings, the group of 3D works named Delivery and the more autobiographical ‘School Photograph’ pieces.

He spends a great deal of time in Cornwall, collecting thoughts and marks. He travels with a good proportion of his studio in the back of his Series II Land Rover so he is always ready to work. “As I cross the Tamar all my work becomes landscape.” he has said.

This theme of landscape has become a strong element in his etchings, even those he made with little modification directly from abandoned metal sheets found on the streets of Deptford. They all seem to hark back to a single set drawings done on a Cornish hilltop. What began as the preliminary sketches towards the ‘View from Trevalgan’ collages have become embedded in his practice.

Drawing in all its forms, in particular life drawing, is a strong thread through his work. He is currently developing a series of drawings he hopes to translate into paintings of the male figure. “It’s part of my process of taking my whole self to work“ he says.

In the past he has described his process of working with 3D objects as one of waiting in the studio for the things he collects to collide. Now he’s working towards all the elements of his work coming together.

“ I’m hoping to have one of those collisions in the studio where all the elements of my work collide.”